As the name implies, this European tour features some of Europe’s capital cities. You’ll stay 2 nights in Paris, capital of France; Brussels, capital of Belgium; you’ll visit Amsterdam, capital of the Netherlands; Berlin, capital of Germany; Prague, capital of the Czech Republic; and Vienna, capital of Austria. You’ll also spend one night in Bremerhaven, Germany, an important Hanseatic port city.

In each of the capitals, you’ll see the sights with a Local Guide, a knowledgeable local who will share with you history, culture, and ins and outs of the city. In Paris, among other landmarks, you’ll see the Arc de Triomphe, Champs Elysées, and Eiffel Tower in Paris; in Brussels, the Grand’Place—the central square surrounded by baroque guild houses and the gothic Town Hall; In Prague, the Astronomical Clock, built in 1410, and Charles Bridge, dating to 1357 and one of the oldest stone bridges in Europe; and in Vienna the State Opera House and Hofburg, the palatial complex in the heart of the city. In Amsterdam, you’ll see the city from water level on a canal cruise—the best way to see Amsterdam!

In addition to the capitals, this European tour also features visits of some of Europe’s smaller—but fascinating—cities. In Antwerp, see the world’s largest diamond district and the 14th-century Cathedral of Our Lady, which dominates the city center with its 400-foot-tall spire and artwork by Rubens. In Dresden, the lovely German city, your guided sightseeing with a Local Guide includes the Zwinger Palace Glockenspiel, where 40 bells sound every quarter of an hour. In Bremerhaven, you’ll visit the new Emigration Center Museum, documenting the German migration to the United States in the last 300 years. In the Czech Republic, enjoy a stroll through the medieval old town in Tábor, founded in 1420 as a city where everyone is equal. For value-minded travelers, this is the perfect vacation to see some of Europe’s fascinating capitals! 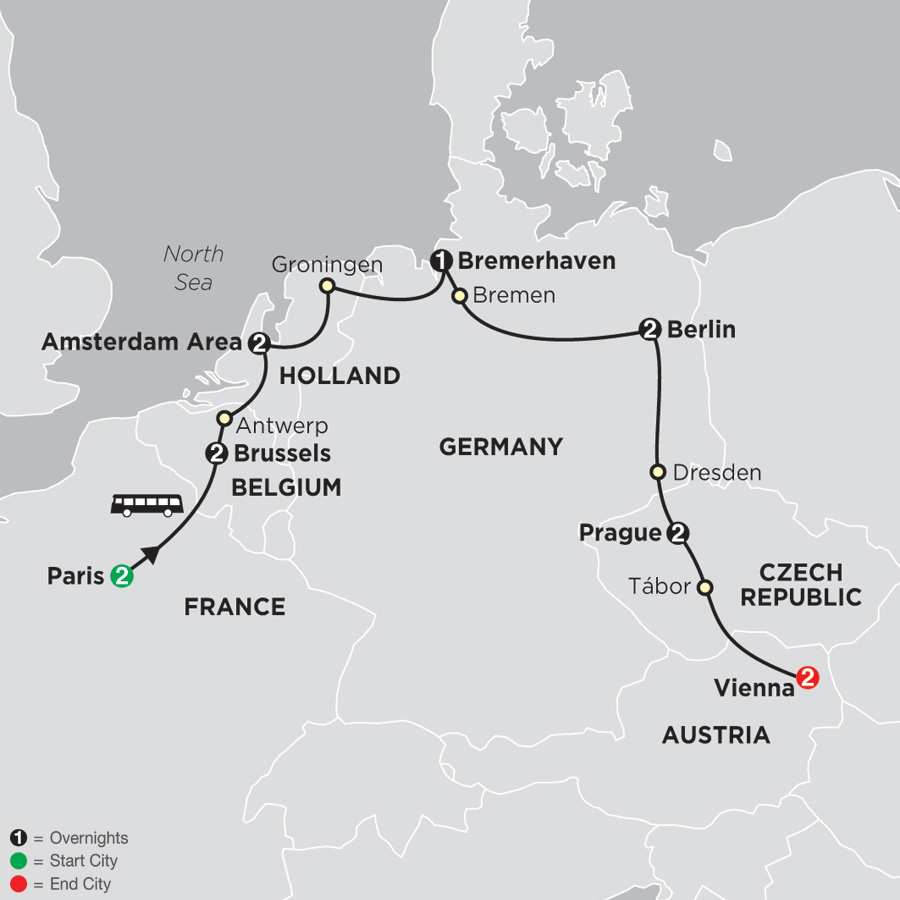 Check into your hotel. The rest of the day is free to explore the French capital with your CosmosGO app. Tonight, meet your Tour Director and fellow travelers.

Paris is a world-class city with more familiar landmarks than almost any other city in the world. This morning, see these sites during the included city tour with an expert Local Guide. In the afternoon, feel like a French aristocrat on an optional walking tour through the opulent Palace of Versailles. Tonight, consider joining an optional dinner at a typical French restaurant.

Enjoy a leisurely morning in Paris before heading to Brussels, capital of Belgium and major center for international politics since WWII. Tonight, dinner is included at a local restaurant.

Join your Local Guide this morning and explore this vibrant city, headquarters of the European Union. Along the way, hear about the ornate Grand Place and see the tiny yet world-famous Manneken Pis statue. The afternoon is free to make your own discoveries.

Start the day by getting to know the international port city of Antwerp with a Local Guide. See the centuries-old Diamond Quarter, the largest diamond district in the world; the Royal Academy of Fine Arts, founded in 1663; the 14th-century Cathedral of Our Lady with its triptychs by Rubens; and much more. Cross the border into South Holland and arrive in Amsterdam, vibrant capital of the Kingdom of the Netherlands.

Enjoy a CANAL CRUISE to see the city from water level, then watch skilled craftsmen cut and polish precious stones at a DIAMOND CENTER. Continue the discovery with a Local Guide showing you the city’s highlights. Maybe get to know the beautiful Dutch countryside on an optional excursion.

Depart Amsterdam and stop in Groningen, an important trade center in the13th century, which today is hailed as the “World Cycling City.” In the center of town, admire the Martini Tower with its 62-bell carillon, the Spanish Moorish synagogue, and much more. Reach Bremerhaven for a guided visit of the interactive GERMAN EMIGRATION CENTER, Europe’s largest museum about emigration, particularly German emigration to the United States.

Travel to the Hanseatic city of Bremen, which majestically straddles the Weser River. Attractions here include the opulent Town Hall, a UNESCO World Heritage Site; the massive, 15th-century statue of Roland, the city’s protector; the oldest wine cellar in Germany, the Ratskeller, whose wine list boasts more than 650 German wines; and the bronze sculpture of the Bremen Town Musicians from the Grimm Brothers’ famous fairytale. You’ll see the highlights on your included guided walking tour, then it’s on to Berlin!

On the included guided tour, learn how, since the fall of the wall, Berlin is no longer divided but every bit as fascinating. Once a city of stark contrasts, Berlin has developed into a harmonious blend of old and new. It has preserved the old buildings, such as the State Opera House and Brandenburg Gate; its neoclassic-style boulevards, such as the Kurfüstendamm and Unter den Linden; and it has created brand new buildings in the most daring, contemporary architectural styles. It is once again Germany’s capital and one of Europe’s most lively cities. This afternoon, maybe join an optional excursion.

Travel southwest toward the Czech border to Dresden, hailed as the “Jewel Box” city for its splendid baroque and rococo center. With four nature reserves and 63% of the city consisting of green areas and forests, Dresden is one of the greenest cities in all of Europe. On your included guided sightseeing tour, see the ZWINGER PALACE GLOCKENSPIEL with its bells made by the famous Meissen porcelain factory, as well as many other city highlights. Cross into the Czech Republic and head towards Prague.

The wealth of gothic and baroque architecture in the “Golden City” of Prague inspired local composers Dvorak and Smetana. Prague will inspire you, too, during your included guided sightseeing tour. See the Jewish Quarter, Charles Bridge, the Old Town Square with its fantastic Astronomical Clock, and more. Your Tour Director can suggest optional excursions, including a fun evening of traditional Czech music and entertainment.

Visit Tábor this morning, founded in 1420 as an egalitarian peasant commune. Walk through the pretty Old Town with its narrow cobblestone streets to its main square. In the afternoon, cross the Austrian border to arrive in Vienna, Austria’s capital. This evening, how about an optional classical music concert?

Once the seat of the mighty Habsburg Empire and home to Strauss, Brahms, Beethoven, Hadyn, and Mozart, Vienna blends ornate baroque architecture with an irresistible musical heritage. You can almost hear the classical music as you stroll its streets. There’s much to enthrall you today on your included guided sightseeing tour. Admire the fabulous State Opera House, Hofburg Palace, and Parliament. Later, maybe try some of Vienna’s heavenly Sachertorte at a traditional coffee house, or join the optional excursion to Schönbrunn Palace. This evening, the included Viennese farewell dinner might be just the ticket!

Your vacation ends with breakfast this morning.

Headsets throughout the tour.

Buffet breakfasts daily; 4 dinners, including dinners at local restaurants in Brussels and Vienna

The Timhotel Berthier Paris 17, with its renovated common areas, enjoys a strategic location and an easy access to Porte de Clichy.

Ibis Centre Gare Midi, newly renovated, is located just a few steps from the railway station, not far from the famous Grand Place and the Brussels city center. 225 spacious air conditioned rooms feature several amenities such as a restaurant, a bar with snacks available 24hrs, pay parking and a meeting room for conferences.

161 Business Rooms and Executive Stylish Rooms, all equipped with today’s modern comfort. Enjoy the hospitality of a reflecting bright and spacious look.

Whether it’s just for a stop-over or for a longer stay, you are very welcome at Tulip Inn Amsterdam Airport. We are only a stone’s throw away from Schiphol airport.What you should know about us: our hotel is a green oasis, both in terms of the interior –with which we quasi get the nature tot he inside- as well as in ecological and social responsible entrepreneurship.

Best Wester Plus Amedia Amsterdam Airport is an airport hotel located 35 minutes from the center of Amsterdam. It’s easy to get to the city center by taking our free shuttle to the airport, and then the train to Central Station. The village of Aalsmeer with the world famous flower auction is reachable by foot in 15 minutes.

The Comfort Hotel Bremerhaven is located on the waterfront with stunning views over the historic fishing port of Bremerhaven. This 4-star hotel in Bremerhaven offers 116 modern rooms, a light-flooded breakfast restaurant, a terrace , four flexible meeting rooms for up to 150 people and the the hotel Affiliate Training and Wellness Center proactively.

Contemporary designed hotel, combining elegance and sophistication with modern facilities, located in the center of Berlin.

Bakery-style breakfast, networking in the lobby, chilling at the bar with your favourite pal ¿ inhale a local but metropolitan neighbourhood vibe at Vienna House Easy Berlin. In buzzing Prenzlauer Berg, just an iPhone length away from the districts of Lichtenberg and Friedrichshain, Vienna House Easy Berlin now appears in new design.

The Hotel offers variable conference rooms with high-tech equipment in all spaces and guest rooms. It also offers various restaurants, bars, a wellness and fitness center and a shopping mall right next to the Hotel.

The Star Inn Hotel “Wien Schönbrunn” is conveniently situated near the west gateway of Vienna. The underground lines U4 and U6 can be accessed in the direct vicinity of the hotel. It will only take you 7 minutes to travel to Vienna’s city centre and just 5 minutes to get to the world-renowned “Schloss Schönbrunn”.

We can make planning your tour easy – all you need to do is complete the following information. An agent consultant will get in touch with you to provide you a quote on your escorted tour. You can also call us at 281-530-4979 to speak to someone right away.